Using no more than seven images, pasted to the wall, summarise, in schematic form, the entirety of U’s speculative reasoning around the phenomenon of the oil spill. You may use connective words and symbols on blank parts of wall between and/or surrounding images.

we finished our work on the first brief. Ludwig said it felt a bit like being in school again and getting a task that is based on studying and summarizing a piece of literature under one specific aspect. We loved it!

First, we reread Satin Island, searching for all passages, in which oil spills appear and for all associations U has in regard to oil (spills). We realised that the oil spills do not appear in the last four chapters of the book or only in an indirect way (i. e. Petr’s cancer, zombie parade). It seems like U’s reflection about oil spills climaxes in chapter 10 when U is holding his imagined speech and excites his audience with the beauty of oil spills. His comparison to fetish/latex clothes, describing it as an alchemic metamorphosis, a material culture defined by the differentiation of oil and water and evoked by the coup d’état of oil against water, really amplifies the lyric combination of both: oil recasts nature, brings it in the new sex-outfit to live thus creating a negative of nature like the shroud of Turin. After the speech new news became more important. So far, our summary.

The images we chose are influenced by U’s associations connected with our associations to U’s associations. We hope our research will be some kind of surprise that still feels close. We were actually surprised by the beauty of the aerial views. The sea looks like a marbled surface, which is in the process of marbling: the oil spill as one huge moving artwork, demonstrating the beauty of catastrophe. U follows Ballard’s understanding of catastrophe, he shows no empathy but is very much interested in the aesthetic of images that catastrophes create and their intellectual interpretation. Therefore the link to Ballard’s collection of short stories with a book cover of a white seabird – an image that is mentioned by U several times – seemed to us an appropriate illustration of catastrophe. The central image of the oil surface is surrounded by further connotations we filtered from U’s thoughts. One very strong theme seemed to be death, which appears through dark clouds, dirty angels and black cancer. It’s the tragos of the novel, which is described as a metamorphosis. The angel of “Wings of Desire” can represent this key thought. Also taken from a film – Olivier Assayas’ “Irma Vep” – is the image of Chinese actress Maggie Cheung, who spends most of the film dressed in a tight, black, latex-rubber cat suit: The movie is about the production of film, in which the costume is essential for the re-make of “The Vampire” from 1915, where Irma Vep plays the main character. The latex-costume re-casts a new figure, similar to the stone-sculpture by Pygmalion, which becomes alive in its perfection. Through material culture the re-casts are made possible: the stone transforms into a human being, Maggie Cheung into Irma Vep, and, as the starting point of the book, a negative print on a fabric turns into an image of Jesus. Pygmalion and Irma Vep are not mentioned as thoughts of U, but the randomness of interpretations and transformations of material, or in other words, artefacts, is mentioned. We chose our associations but two further images are closer to the book, the print on the shroud and the news image with the bird: both are negatives of  themselves, amplified through differentiation. The aerial view is the hub, all is connected with this image that includes all words.

We will send you a high res image of the installation tomorrow but are of course keen on your feedback.

Devise a schematic or pictorial means of summarising U.’s reasoning around the figure of the doomed parachutist. The form this takes is entirely up to you.

The second brief was a tricky one. Less because of your brief in itself but because of the various interpretations we discovered while we were thinking about the doomed parachutist: For U, we found, the story serves as a starting point for his reflections on space and time, on faith and rituals. His thoughts revolve around the aesthetical and philosophical qualities of the accident, especially where he considers the impossibility to determinate the scene and time of the crime. Mostly he reads the news about the crime’s development deep under the surface of the earth in the subway, as if you only had to dig deep enough under the ground to find the truth. However, he never considers the parachutist’s death itself a tragedy. U is fascinated with a possible pattern between all parachutists worldwide who got killed by a sabotaged parachute during a jump, but he never shows any empathy. Rather he executes his anthropology, exploring an exemplary phenomenon. Though U’s emotional side shows when he believes that he has solved the puzzle, uncovered a conspiracy and found the motif for the crime. It was a game not a crime, even though a dangerous one: Russian roulette. Briefly after the enlightenment he received an email that he was wrong, which evoked the beginning of a depression.

Like U, Ludwig and I followed many trains of thought trying to find an appropriate visual or schematic summarization, of which none were satisfying. We investigated the tense “Future Perfect”; read about the Kris Kaspersky, a Russian hacker, immigrated to the US and died mysteriously when he took a parachute jump; checked parachute references in Tintin and Spiderman; looked at photographies by Trevor Paglen, which reveal hidden deep water cables and which transport all the internet data; referred to the pyramid of the illuminati – in the centre the parachute jumper, the corners of the triangle defined by the notions pattern, superimposition and preemptive future; and on and on…

While researching I read “Conversation” by Adam Thirlwell, a script with Philippe Parreno, and a little masterpiece in the genre of “art meets literature”: The idea of writing an exhibition as a script for a film that is an exhibition. The conversation of Thirlwell and Parreno is circling around the introduction of the other, the alien or monster, an automaton that operates without influence of any human being. The idea that an automaton or an intelligent program triggers a chain of ideas/images regardless of our memory, our associations and our thoughts – that source being all collected data – seemed to be the perfect tool to summarize U’s research about the phenomenon of placelessness and timelessness; a phenomenon, which makes it impossible for U to solve the puzzle through human logic and reason as he does not understand the language  – and which, in a bigger scale, reflects U’s inability to write the Great Report and, again on a smaller scale, our inability to find an appropriate visual translation for the doomed parachutist. Even though inventing such a program would blast the frame of the project in many ways, I couldn’t stop thinking about it – and was influenced by it when I read another text: speculative thoughts by Armen Avanessian about a new mereology of politics for the 21st century. Firstly, mereology itself attracted my attention, the medieval doctrine of parts and the whole. Isn’t our task, doing research about U’s research over the course of 15 months, building up something step by step, based on parts and a whole? But, if the parts are the results of each brief, what is the whole? And do we have to consider the whole when we are working on a part of it? Also, following Avanessian’s thoughts, what happens if the parts are getting integrated into or are dissolving from the whole? How does each particle change the whole and the whole the particle? All these questions appeared and for a short moment I was convinced that we needed to start all our further research from the first research, the oil spill, and like a spider spinning the yarn from there to build a solid net that keeps us up in the air. However, this approach would have required Future Perfect as tense and we felt that didn’t work in the end: its relational time frame depends on one knowing how the whole will look like, and that this knowledge influences the future actions of which one already knows that they will be performed. Again, only an algorithm would have the necessary capacity – or the aliens in Arrival, a movie by Denis Villeneuves, to which Armen Avenessian refers in his text several times. In the movie the linguist understands that at first we have to learn the language of the aliens – like the language of the Great Report of the present, which has been written, is written and will be written in the language of digital data, which we do not understand (yet). So we still had no idea how to summarize these theoretical thoughts in a schematic or pictorial form.

Eventually, it was a chain of unpredictable events, which led to the solution. I went to a bookshop, impatient and excited to buy the catalogue of the exhibition “The boat is leaking. The captain lied” by Thomas Demand, Alexander Kluge, and Anna Viebrock. The seven words of the title gave my suspicion a name, a vague feeling that you, like Peyman, were always aware that we will fail to summarize the “doomed parachutist” phenomenon. Owning the book seemed like a promise to find salvation – and if only to be consoled in the company of misguided others. Disappointingly, the book was not out yet. At a loss, I strolled through the bookshop, found a wonderful collaboration between Don DeLillo and Richard Prince (The Word For Snow), which I didn’t buy, and already on my way out my gaze fell on another book by Richard Prince, his collective writings. I was not looking for Richard Prince in particular, I have not even thought a lot about his work in the last years (except when he announced his disown of his Ivanka Trump portrait) and without any expectation I opened the book and read: I was travelling with Bob Dylan and J.G. Ballard to the opening of the new Richard Prince exhibition in Abu Dhabi, an essay by Jonathan Lethem about the Richard Prince stories, which cites a reference to David Bowie’s „Man Who Fell To Earth“ and which ends with the sentences: “Hey, do you know anything about parachutes?!” The guy flying up looks down and yells, “No, do you know anything about gas stoves?!” A summarization of Richard Prince thoughts in the drag of a doomed parachutist, out of place and time, absurd and crystal clear, elusive, and full of patterns, rituals and faith, a joke in a secret yet readable language. There it was, the salvation.

Our excitement about the discovery of the essay is comparable with U’s “Russian Roulette” enlightenment that it was not a crime but a game. So, when we open the next chapter of The Office to the public, not images or schemes but fanzines will hang on chute cords, an architectural intervention by Johanna Meyer-Grohbrügge. The fanzines containing the essay by Jonathan Lethem, each with a different cover image we collected during our research, and a photo by Henri Huet of a person falling to earth on the back (with which the Lethem essay ends). The installation itself merges with the screening of Johan Grimomprez’s Satin Island video.

We are aware of the risk that an email by you telling us that we misinterpreted the brief and that our summarization of U’s reasoning about the parachutist makes no sense, could cause a downfall of our excitement. However, this is as good as it gets.

Please find attached the essay and the cover images. We are looking forward to your feedback. 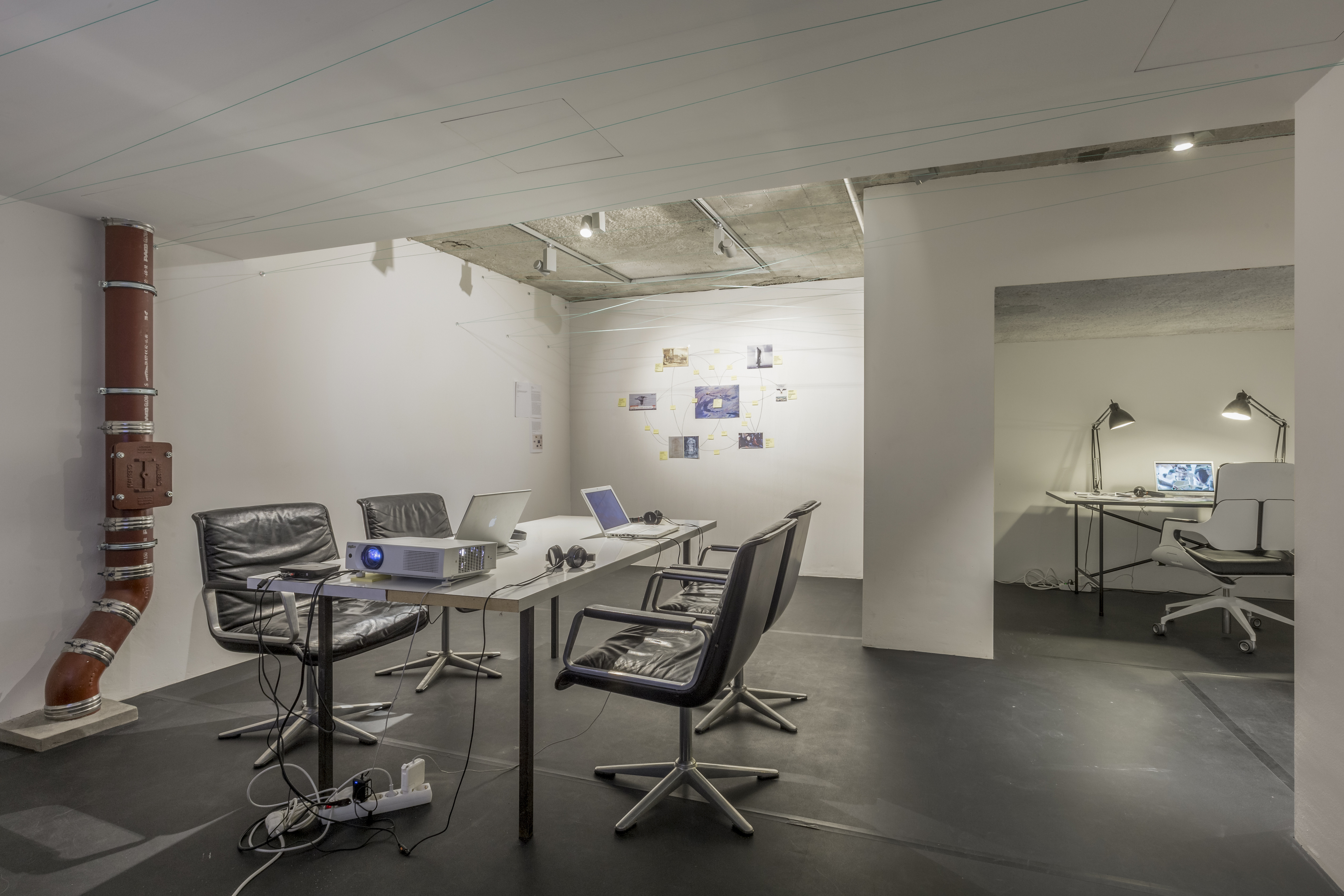 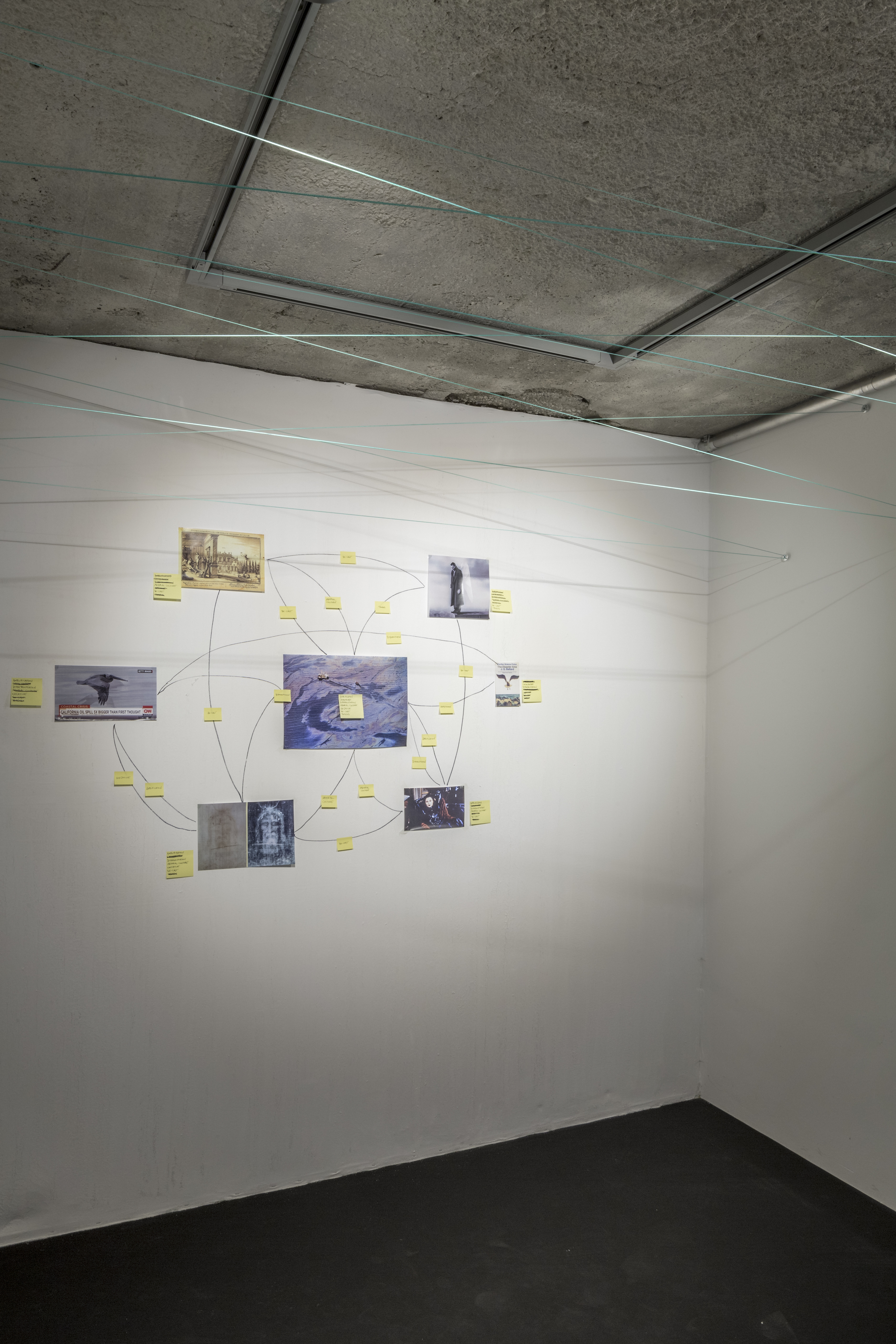 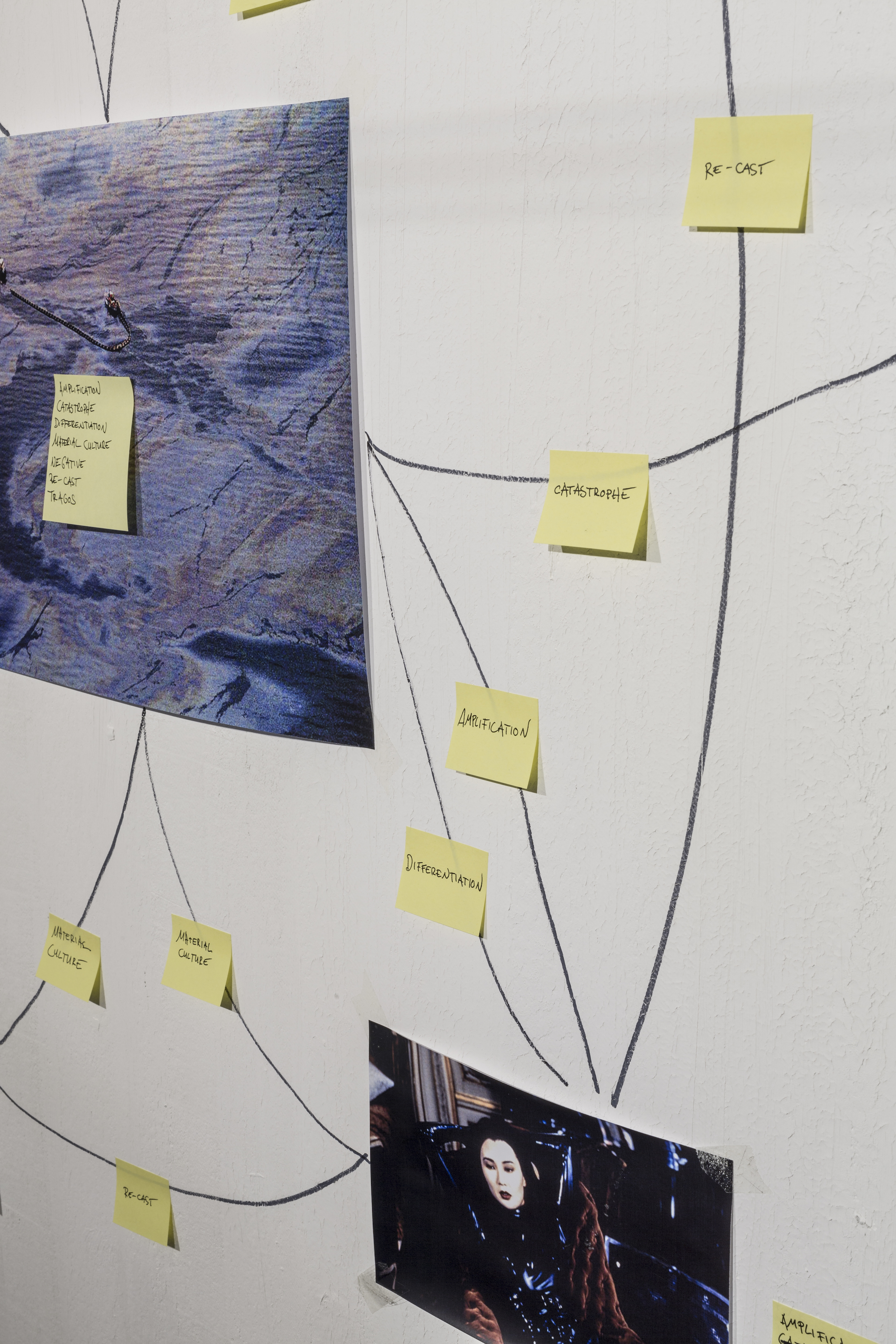 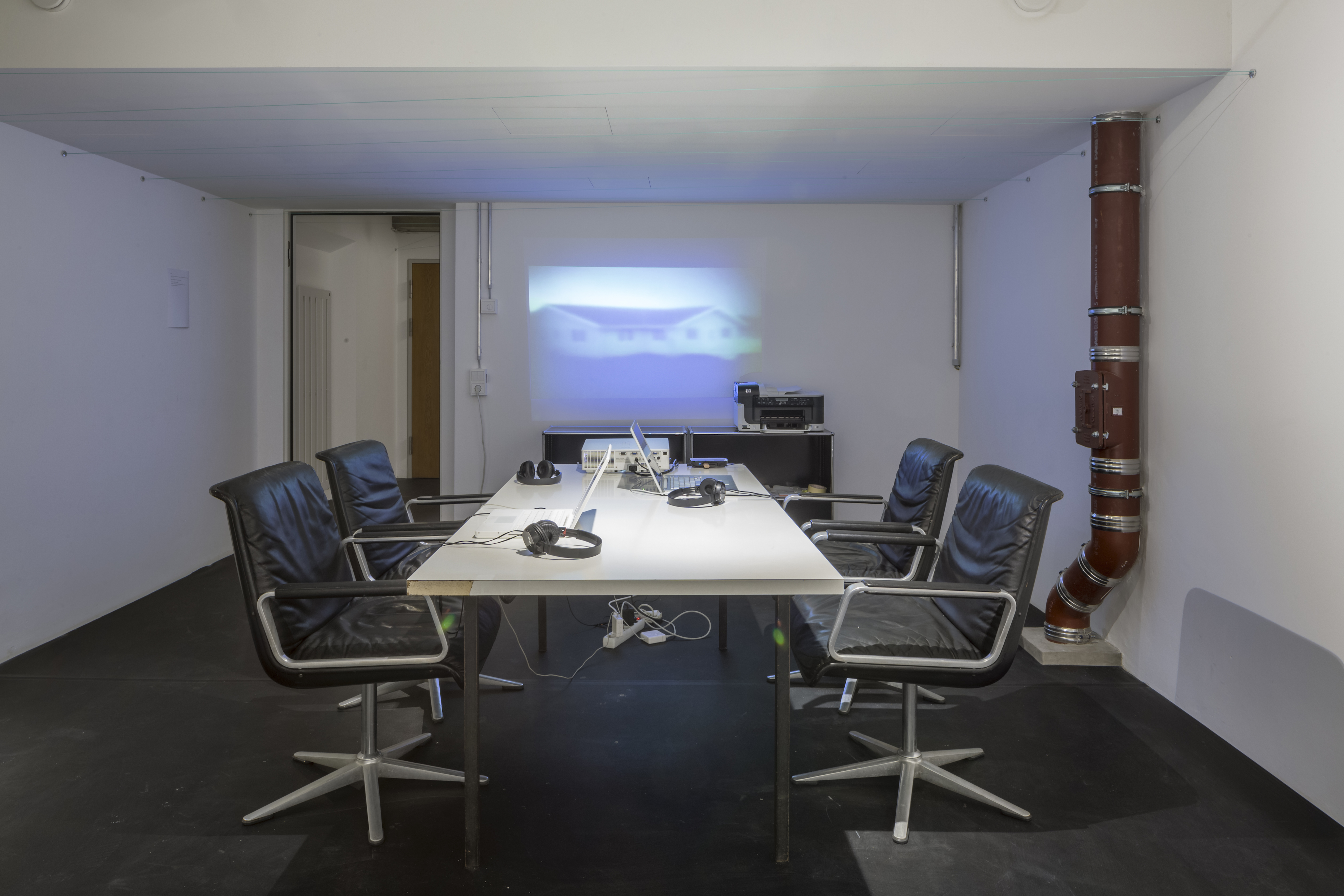 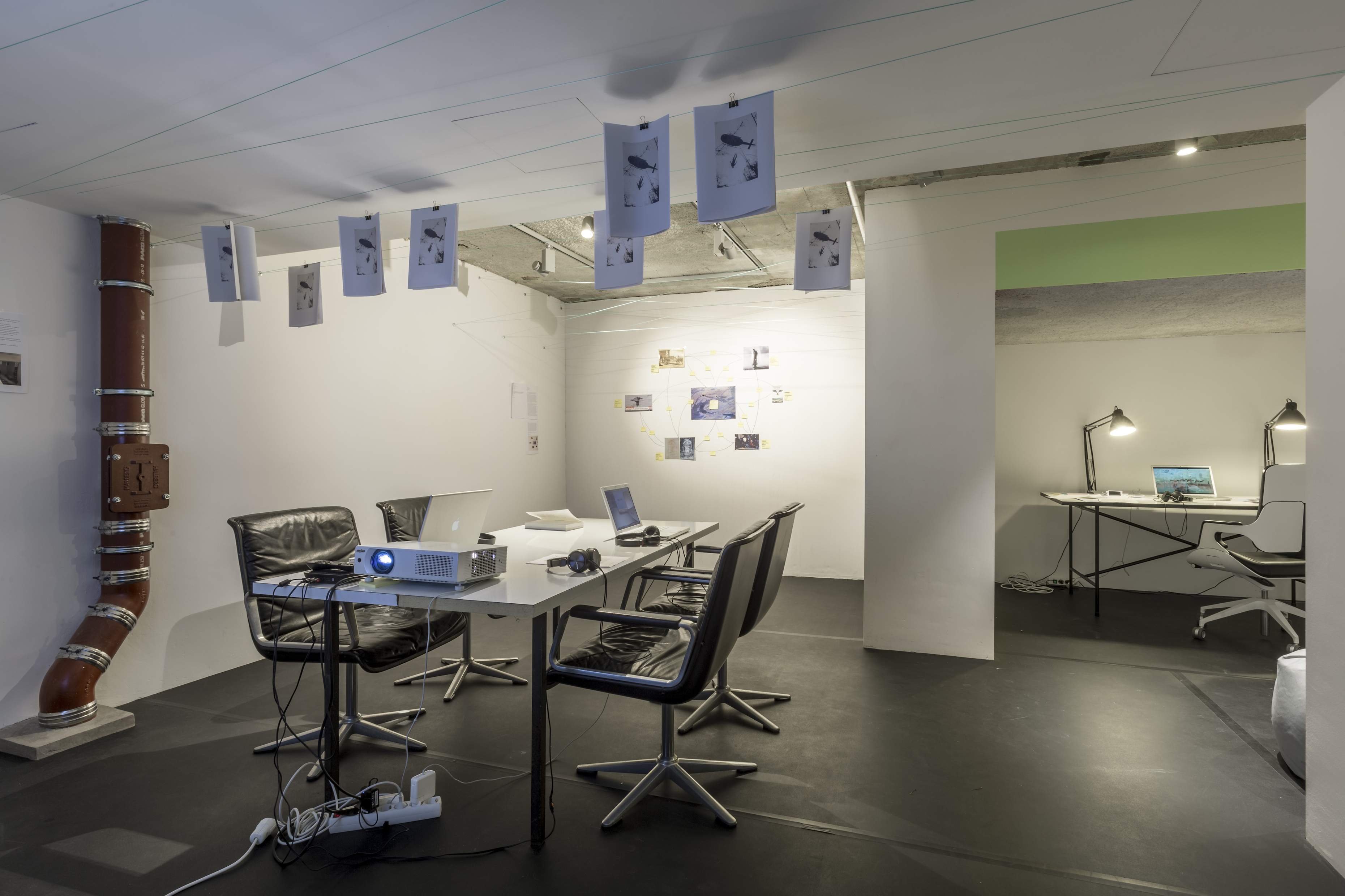 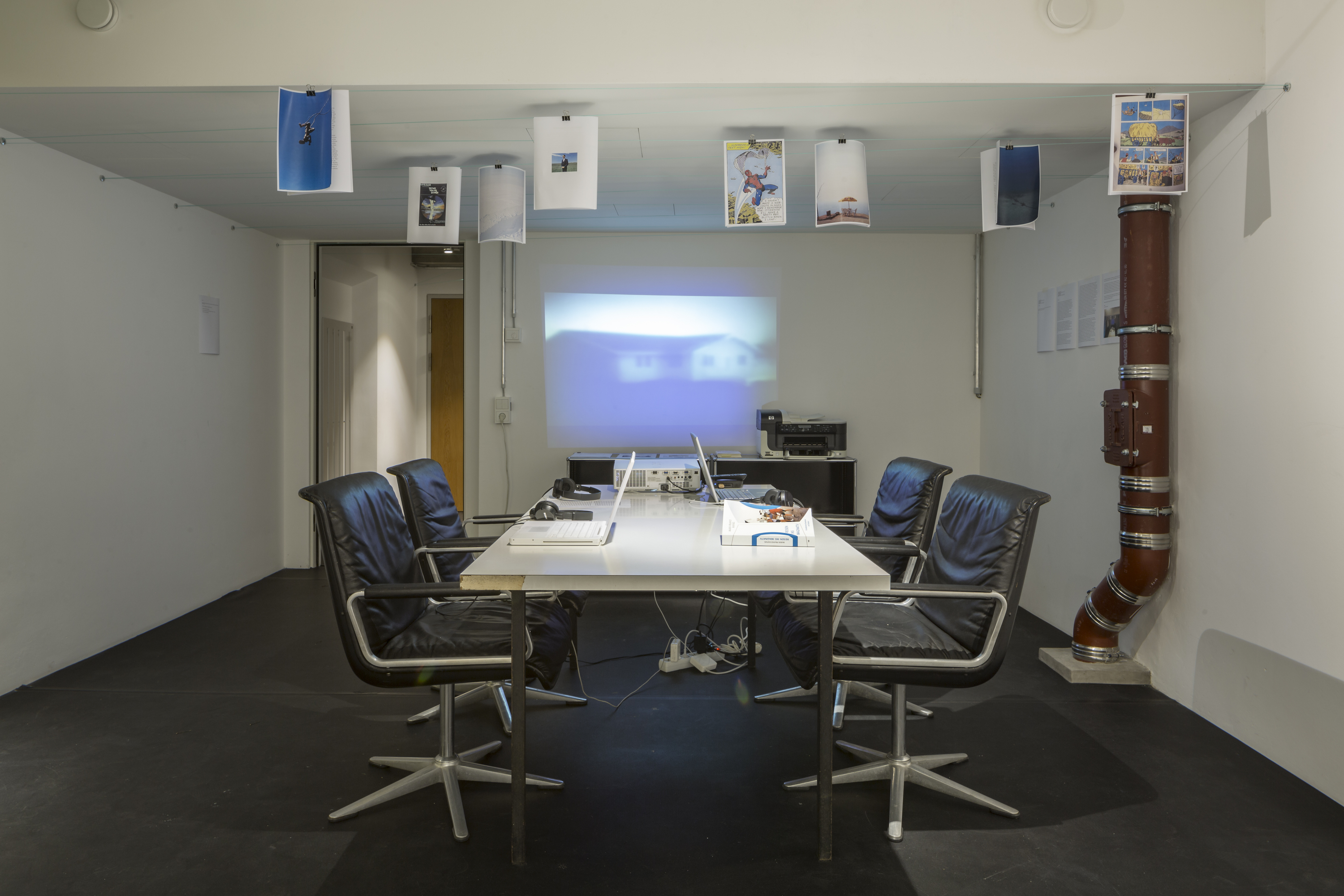 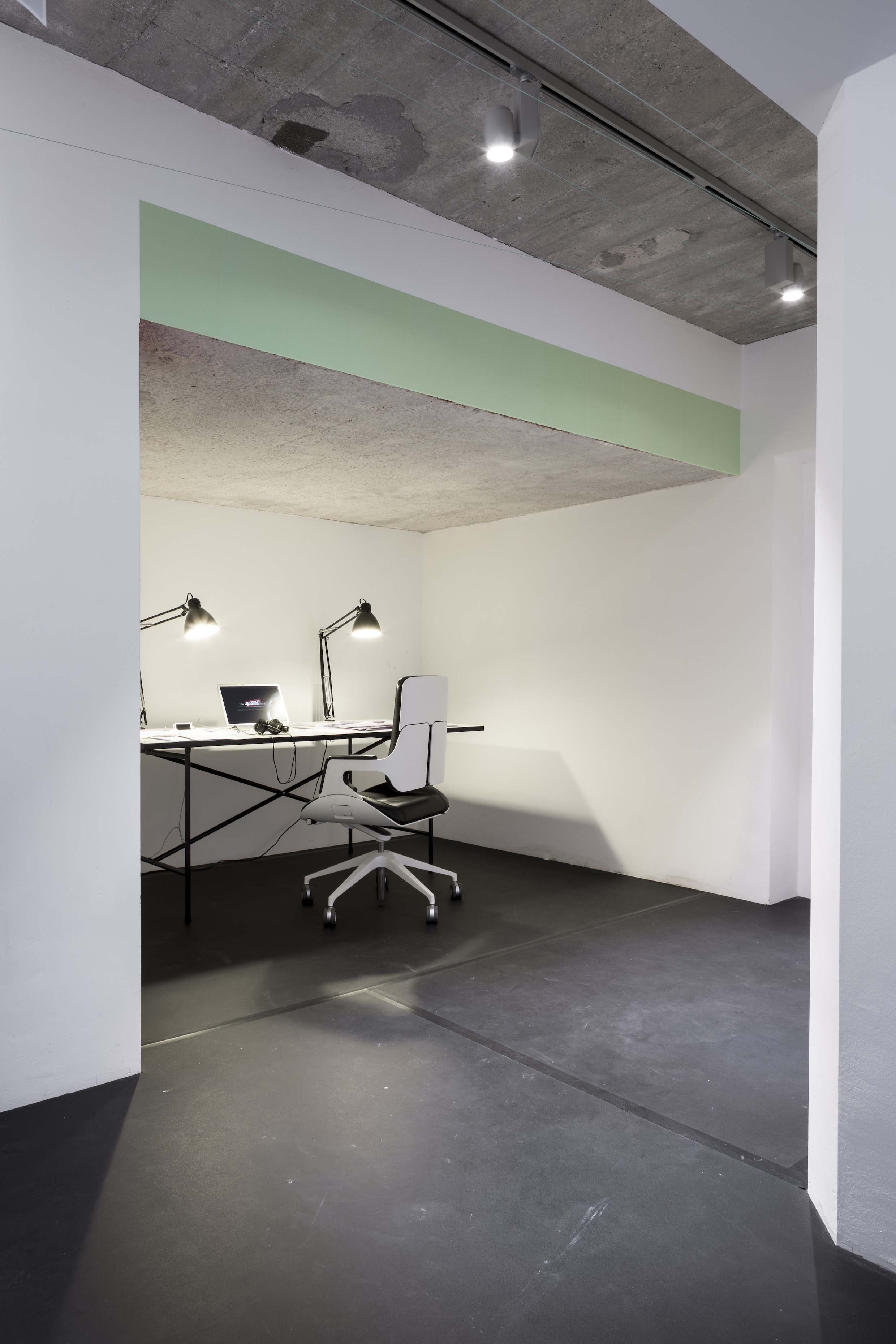 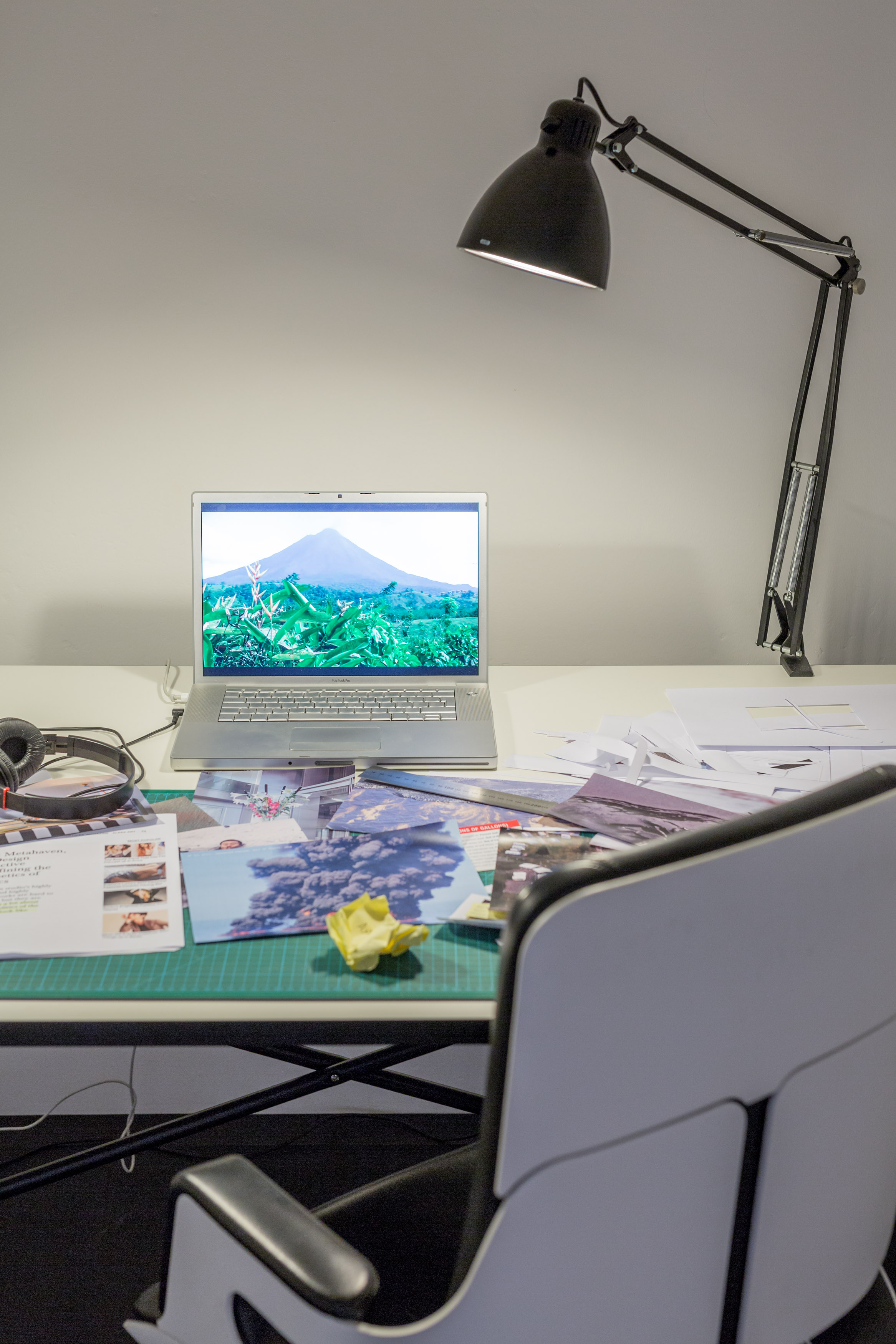 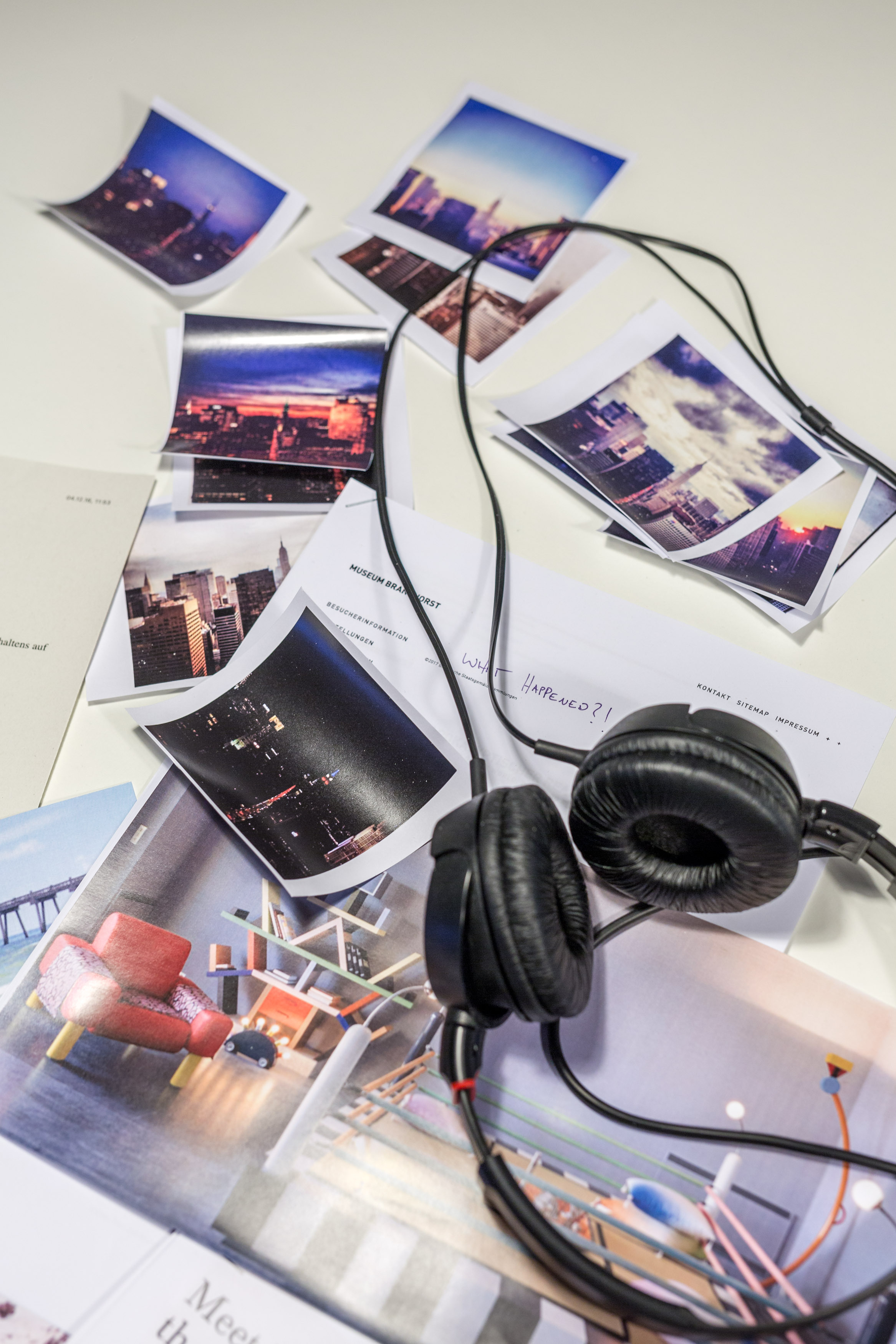