“Imaginary Display(s)” presents everything that is usually hidden from the audience: In a week-long production/performance, visitors will simultaneously witness the development process of an exhibition and the production process of a film: the film shooting, montage and post-production (music score etc.) will be exhibited as the exhibition becomes the stage set for the film.

Each participating artist will install, prepare and/or rehearse his/her work on a specific day. Thus a process will be set in motion that triggers uncontrollable situations, leading the development process of the exhibition into new, unexpected directions each day.

On the first day Klaus vom Bruch installs a self-designed found-footage-wallpaper. The act is filmed. The space changes and a film set appears. The scenario is explored further on the next day: Video artist An Laphan films a speculative scenario of the exhibition as a film, the visitors become part of the exhibition and the film. On the third day, Philip Gufler installs his printed fabric layers and rehearses his evening performance “Jäcki ist für Jäckis”—a reading from his artist book “Indirekte Berührung”. The fourth day adds another moment to the changing exhibition and the ongoing production of the film: The process of the film’s production is exhibited. Kalas Liebfried designs a site-specific sound piece that becomes the film’s score on day five. On the sixth day a doubling is staged: Jeanne-Marie Varain presents her film as part of the filming process. Romain Gandolphe takes the visitors on a tour through a ‘narrated exhibition’—an oral history that becomes reality as part of “Imaginary Display(s)” on day seven. On the final and eighth day Richard John Jones and Camilla Wills prepare a live-karaoke performance—the potentiality of a finissage and/or a vernissage coincide.

“Imaginary Display(s)” is without beginning and end. The exhibition and the film mark many different fictions and moments that don’t follow a consistent narrative but thematize the rationale behind ‘narratives’ on an abstract level. The weeklong production/performance is the high point of the long- term film project “Exhibition as Film / Film as Exhibition” by Marie-France Rafael and An Laphan. For each event of ‘Stop making sense, it’s as good as it gets.’ the film project reflected on possible visual experiences through continuously shifting narrative structures and perspectives. With “Imaginary Display(s)” the absurd differentiation between image and situation of the film project climaxes. “Imaginary Display(s)” will also be the title of the film—the film that is produced within “Exhibition as Film / Film as Exhibition”. Exhibition and film are inseparably connected and both embrace the inherent tension of the visible/invisible and presentation/representation in their respective medium.

Klaus vom Bruch is a German media-artist. From 1975 to 1976 he studied Conceptual art at California Institute of the Arts Valencia with John Baldessari and Bruce Nauman. 1984 he exhibited at the Venice Biennale and 1987 at documenta 8, Kassel. He was a professor for media-art at the Academy of Design Karlsruhe and at the Academy of Fine Arts in Munich. 2000 he was a guest- professor at the Columbia University New York.

An Laphan is a German moving-image artist and assemblagist. He studied New Media Art at the Academy of Fine Arts in Munich since 2010 as master-class student under Klaus vom Bruch and as participant of the project class Julian Rosefeldt. In 2014 he received the scholarship for the exchange program of the Academy of Design by the Ministry of Education and Cultural Affairs Baden-Württemberg and studied Moving Image, Screenwriting and Film Theory under Isaac Julien and Razvan Radulescu. The main focus of his work lies on the representation of thresholds: in-between states, the notional void between two nameable things, the doorstep between map and territory. His work has been shown at the Kunstverein München (2016) and Nir Altman Galerie (2017).

Philipp Gufler lives and works in Munich and Amsterdam. His work spans a variety of media (prints, performances, video work and more). He studied at the Academy of Fine Arts in Munich and the Academy of Design Karlsruhe. From 2015-2017 he was part of the residency program “De Ateliers” in Amsterdam and from 2014-2015 he was a member of “Lothringer 13_Florida”, an art space by the city of Munich. Solo exhibitions: “Setz dein Ich in Anführungsstriche”, Kunstverein  Göttingen (2016), “Zirkeltraum” and “Een gebeuren”, Galerie Françoise Heitsch in Munich (2014, 2016) “Romankreisen”, Galerie BQ Berlin (2017) as well as “I Wanna Give You Devotion” at Platform Munich (2017). Group exhibitions at the Kunstmuseum Bonn (2015), the Lenbachhaus Munich (2016), De Appel Art Center, Amsterdam (2016) and at Rongwrong, Amsterdam (2017). Since 2013 Gufler has been conducting research in the archives of forum homosexualität münchen e.V.

Kalas Liebfried holds a degree in Philosophy from the LMU Munich and studied Sculpture and Time-Based Media with Stephan Huber, Julian Rosefeldt and Alexandra Bircken at the Academy of Fine Arts in Munich. Liebfried’s narrative works including video, sound, performance and sculptures, emerge from the appropriation, decoding and montage of found footage material. They aim to explore and visualize the traces of the unconscious, the transitory conditions and in-between media spaces. A basic motive is the ephemeral structure of the body. He participated in several shows including the Kunstverein Munich, the Sluice Biennial 2017 London, and the Internationale Kurzfilmtage Oberhausen.

Jeanne-Marie CC Varain lives and works in Schiphorst. She studied Fine Arts at the HbK Braunschweig and Spacial Strategies at the Muthesius in Kiel. Together with the artist duo Muerbe u. Droege she founded the networking label AGF spirit. Ever since then Action, Happening and Social Plasticity are not an oldschool thought but the driving force and the centre of their art. With actions like the “AVANTGARDE is HAPPENING”, “Kinder an die Macht”, “Sleep-in Performance”, “RÉSIDENCE FRANCE” and the Action Space CoC – Collection of Collectors they support the Avantgarde in a rural environment. MuD and JMCCV are the punk trio “Ernsthafte Angelegenheiten”.

Romain Gandolphe is an artist. After scientific studies, he graduated from the Lyon National Fine- Arts School, where he is now researcher within the Post-Performance-Future group. Through speech and performance art, his work deals with memory and storytelling. He recently performed at the MNAM Centre Pompidou and at the Fondation d’entreprise Ricard in Paris. He participated in several shows including “I am not Tino Sehgal” at Nahmad Projects in London and his first solo show was held at La BF15 in Lyon (2017).

Richard John Jones is a graduate of Central Saint Martins, London and the Sandberg Instituut, Amsterdam and until 2012 was a Co-Director of Auto Italia South East, London. His work is concerned with the interaction between visual forms of representation/abstraction and political forms of recognition and marginalization. Performances and a critical approach to their documentation, are central to his work and inform his use of fabric, print, domestic craft techniques, video and installation. Jones’ work has been shown at the Irish Museum of Modern Art (IMMA) Dublin, Museum of Modern Art Medellin (MAMM), EYE Film Museum Amsterdam; Rond Point Projects Room Marseille, SPACE London and the Gwangju Biennial in collaboration with AA Bronson. He is currently a recipient of the IMMA Freud Project Residency Dublin.

Camilla Wills is an artist and editor living in Brussels. Collaborative and solo presentations include Gaudel de Stampa Paris (2018); Montague London (2018); Chapter New York (2017); Tonus project space Paris (2017); Kunsthal Aarhus DK (2016). She is currently enrolled in the social sciences department at Université Libre de Bruxelles. Recently she’s written about contemporary representations of loss, the “meta-describer”, media and co-suffering for May Revue and Immixtion press Marseille. She will be in residence at Camden Arts Centre London from September 2018.

Marie-France Rafael holds a Ph.D in Art History. She studied Art History and Film Studies in Berlin and Paris. From 2011 to 2014 she was a research associate at the Collaborative Research Center 626: Aesthetic Experience and the Dissolution of Artistic Limits at the Free University Berlin. Currently she is a research associate at the Muthesius University Kiel, Department of Spatial Strategies and she lectures at the Academy of Fine Arts Münster. Recently her monography Reisen ins Imaginativ. Künstlerische Displays und Situationen (Köln: Walther König, 2017) was published. Other publications include Ari Benjamin Meyers. Music on Display (Köln: Walther König, 2016) and Pierre Huyghe. On Site (Köln: Walther König, 2013).

The project is part of Stop making sense, it’s as good as it gets.: a program developed by Ludwig Engel and Joanna Kamm, derived from a close reading of Tom McCarthy’s novel ‘Satin Island’. The book deals with the impossibility to reach the present and the resulting inability to write the Great Report on our contemporary society. Following these thoughts, artists, writers, architects, theorists and scientists are invited to discuss their interpretations of time through different formats. 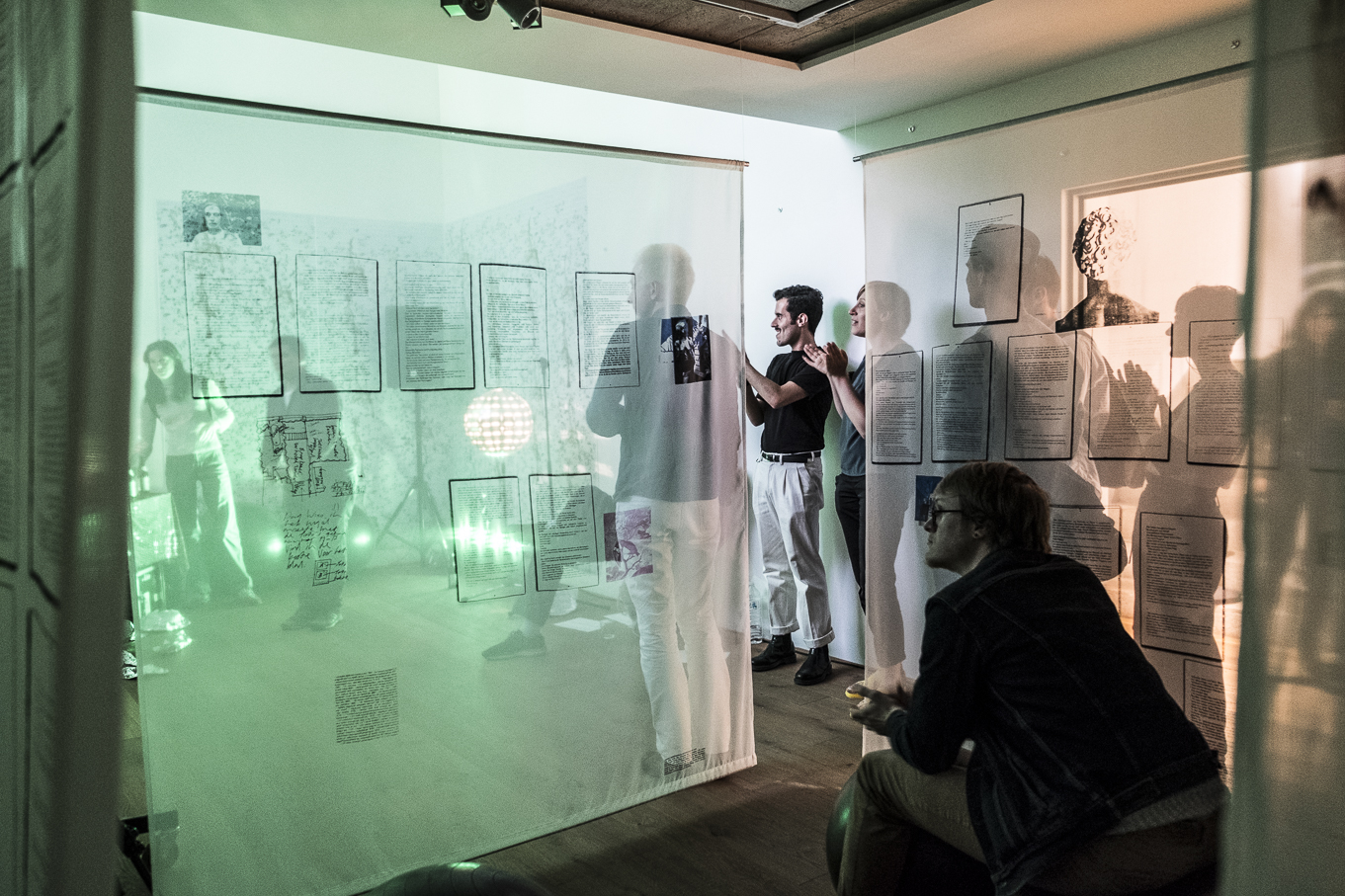 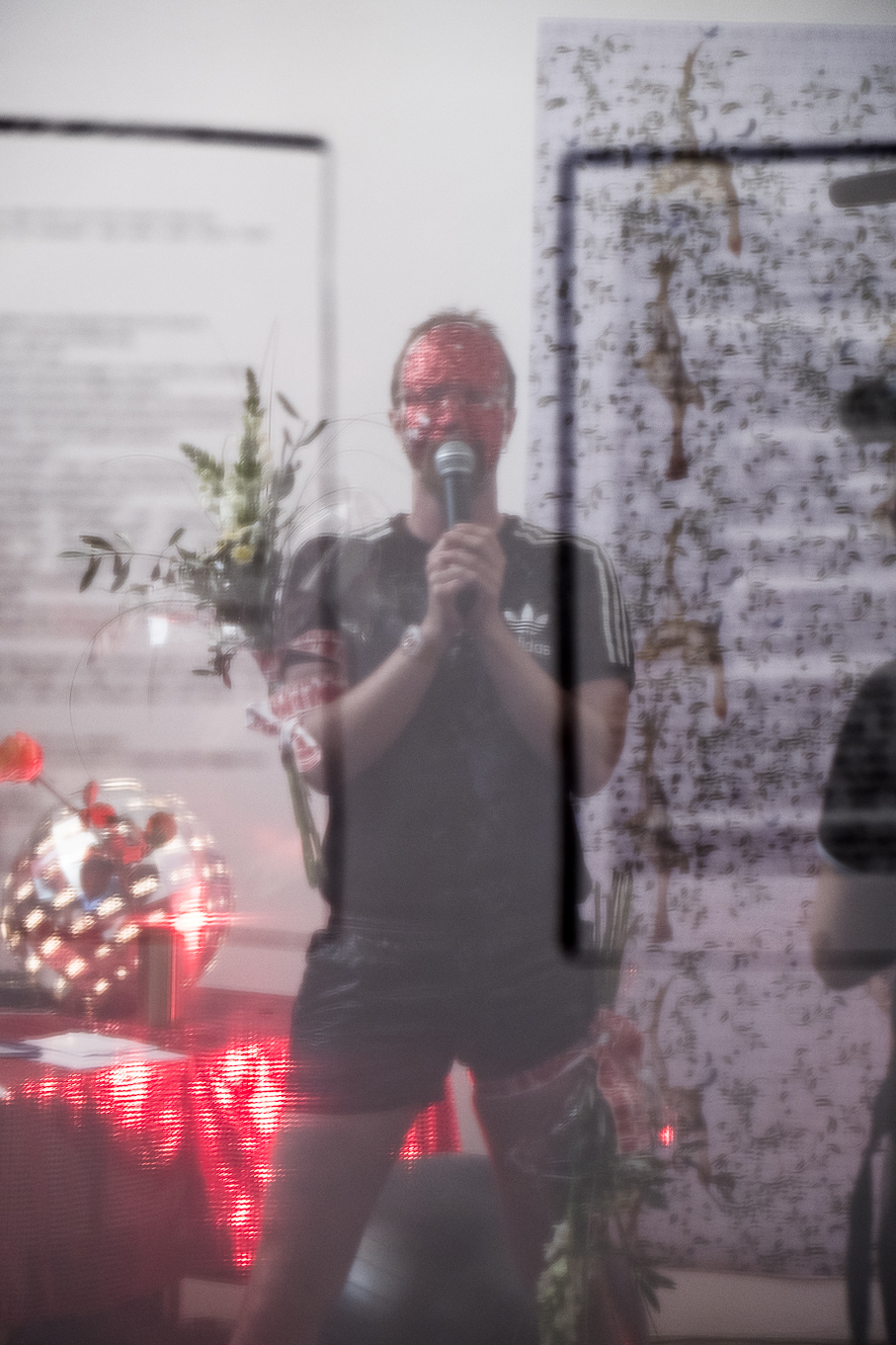 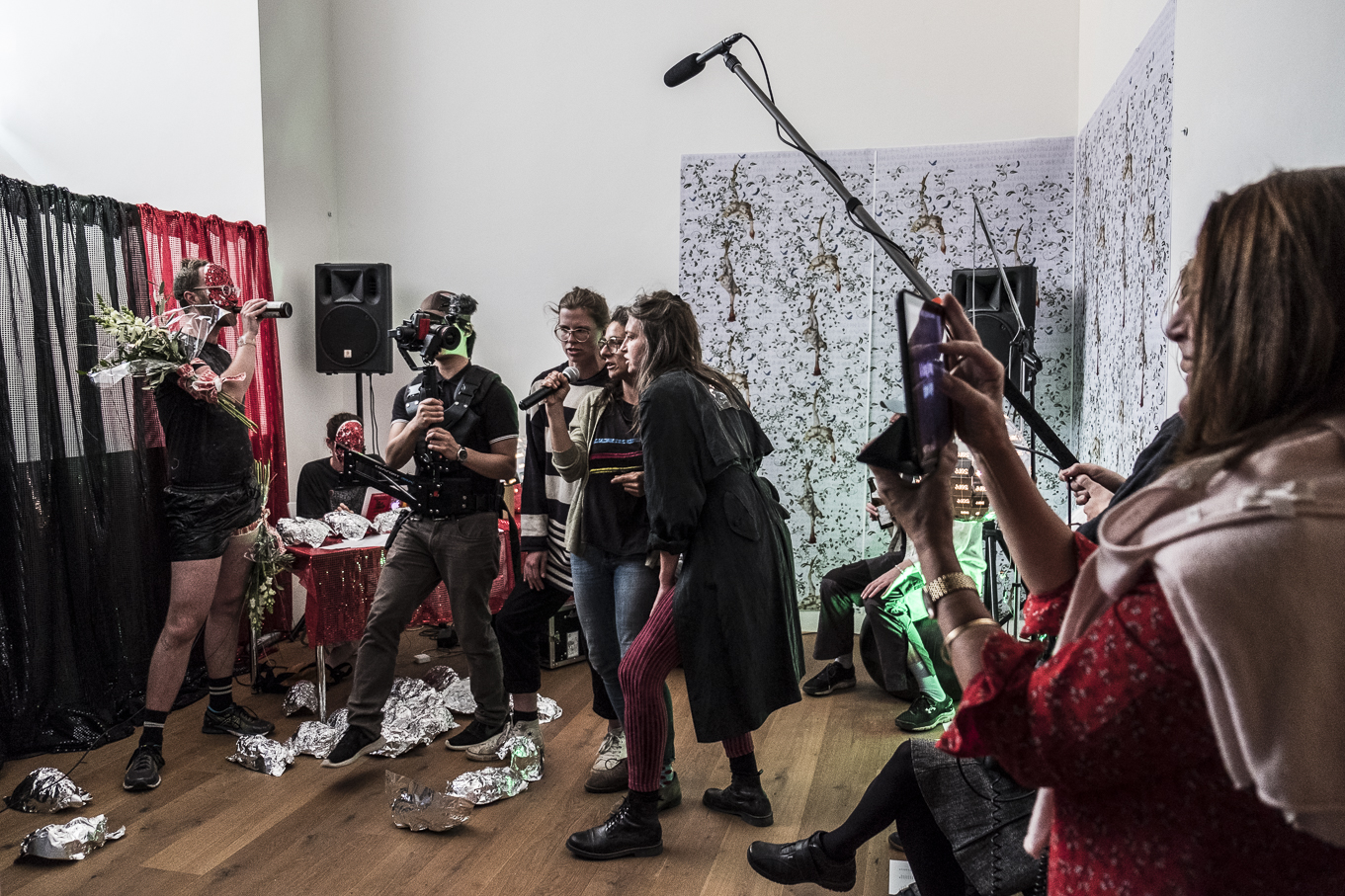 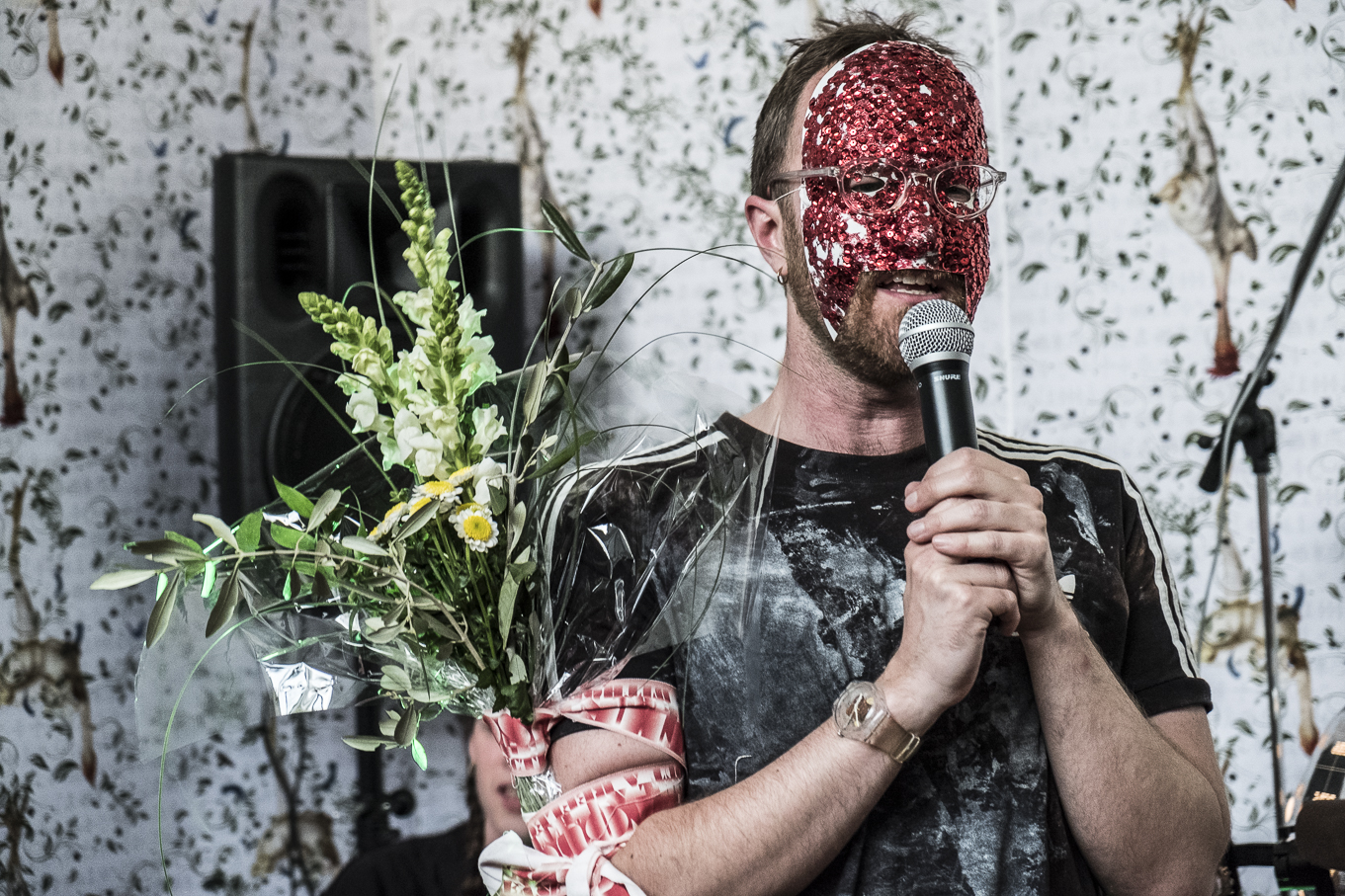 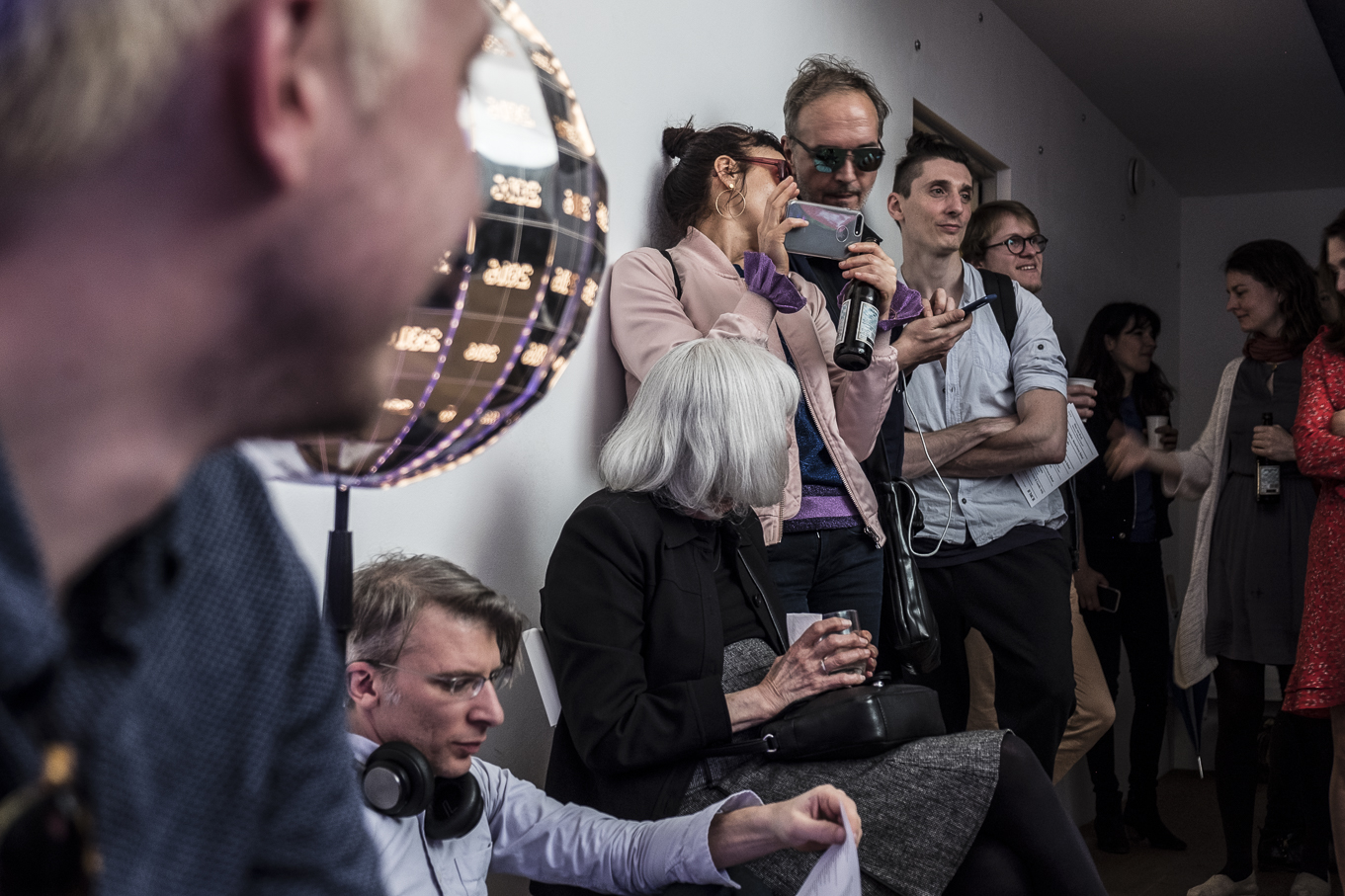 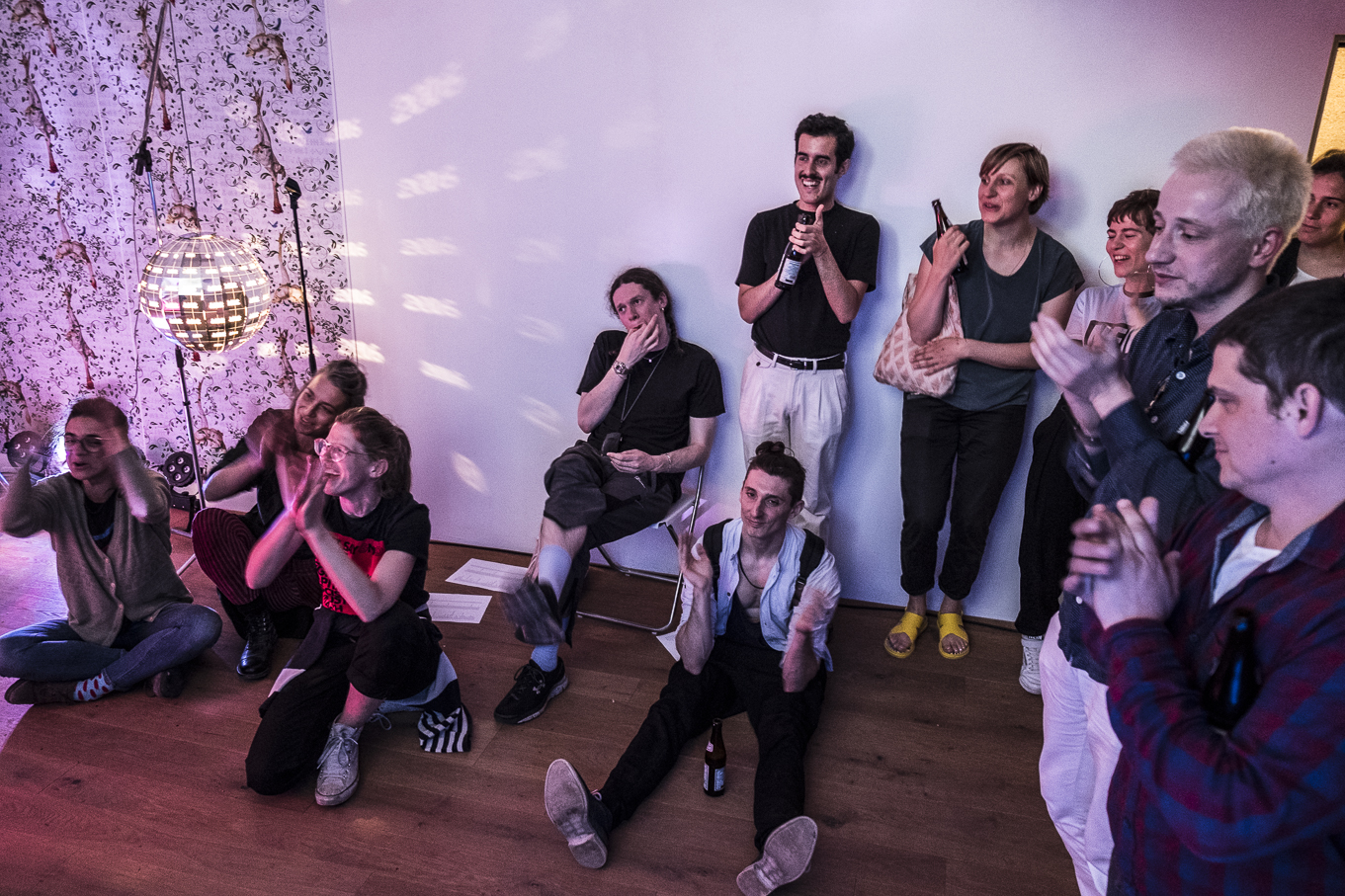